Originally constructed in 1872 as a private home, Athlone House sits in an elevated position in circa eight acres of grounds with exceptional views across London. Requisitioned and used as an RAF Intelligence School during World War II, it later became a geriatric hospital, before being left unoccupied and becoming so derelict that the next owner was keen to demolish it and build a new property. Local opposition to this led to years of planning delays and the current owner has opted to return the house to its former glory.

The task of transforming the historic property is the responsibility of main contractor, Knight Harwood, and the company has enlisted the help of Millcroft to design, erect and manage the complex scaffolding and access requirements of the project.

Knight Harwood’s scope of works includes new roofs, extensive structural works, restoration of stonework and brickwork, damp proofing and replacement of all windows. The poor condition of the building and the extensive façade works have meant that Millcroft cannot fix the scaffolding to any part of the existing house. Instead Millcroft’s design team has designed an independent scaffolding structure that can be anchored to the ground using around 200 Kentledge blocks instead.

In addition to the structural challenges of designing the scaffolding structure, Millcroft’s in-house design team has also had to consider the exceptionally high wind loading prompted by the property’s elevated position and the wind tunnel effect of the openings within the scaffold enclosure. This has involved the use of simulation techniques to engineer the scaffolding for safety and to sequence erection of the scaffold and sheeting in a meticulous programme that supports site safety at all times.

The scaffold is now in place but Millcroft will retain a permanent team on site to carry out adaptions as the programme has progresses, attending weekly project planning and health and safety meetings to support Knight Harwood’s project management team. 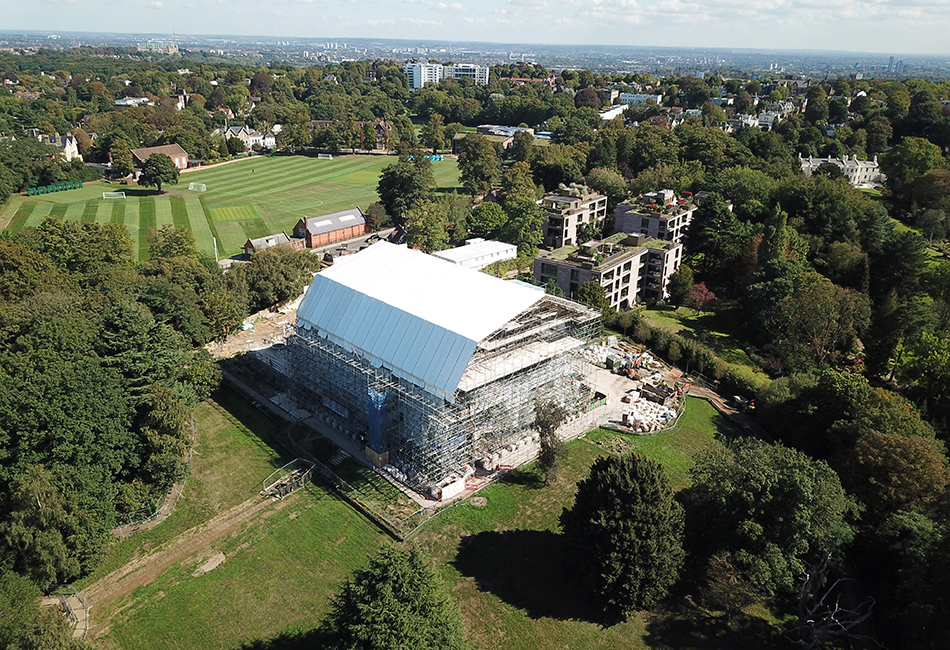