Millcroft Takes Working at Height to Extremes with Everest Sponsorship

Scaffolding specialist, Millcroft, is sponsoring one of the company’s team to climb Everest, with 31-year-old Paul Hodges hoping to reach the summit in time for his 32nd birthday in May.

Born and raised in London, Paul didn’t have the kind of upbringing that most would associate with expeditions in Nepal but his response to a challenging background has been to live life to the full. Now Millcroft’s sponsorship will allow him to take that philosophy all 8,840m to the summit of the world’s tallest mountain.

Paul Explains: “I had a tough start in life but I firmly believe that we’re here to make the most of our time on the planet and nothing should hold you back from doing that. “I’m really fortunate to work for a company like Millcroft who are not only willing to offer me the moral support I need to face the challenge of climbing Everest but have also given me their financial backing.”

After flying out to Nepal on 5th April, Paul briefly stayed in Katmandu to gather supplies (including shower gel he plans to use with a makeshift cold water shower crafted from water bottles!), before flying to Lukla. From here, he embarked on a two-week trek through Sagarmatha National Park to reach base camp, before making his attempt to climb Everest in a small group, which includes an expedition leader and a Sherpa.

Paul’s job with Millcroft keeps him fit but he has been training for his adventure for months, visiting the gym twice a day to do cardio and strengthening work to prepare him for the arduous conditions, and sleeping in a hypoxia-inducing tent to teach his body to cope with limited oxygen.

He continues: “This is not the first climb I’ve done. I have previously climbed most of the larger peaks in the UK and have also climbed Island Peak (Imja Tse), which is the mountain located next to Everest. I also skydive and fly helicopters in my free time, so I’m no stranger to risk and adrenalin, but Everest will be, by far, my biggest achievement yet.”

There is just a five day window when weather conditions will allow Paul to reach the summit of Everest, setting off from the ominously named Death Stone camp at 7,200m. Billy Jones, Director of Millcroft adds: “Our teams are used to working at height but Paul will be taking that resilience to the extreme with this challenge and we’re extremely proud to be sponsoring him.

“We’re looking forward to seeing pictures of Paul at the summit and sharing his experience through the videos he sends back; it will definitely be the highest point ever reached by a Millcroft branded sweater!” 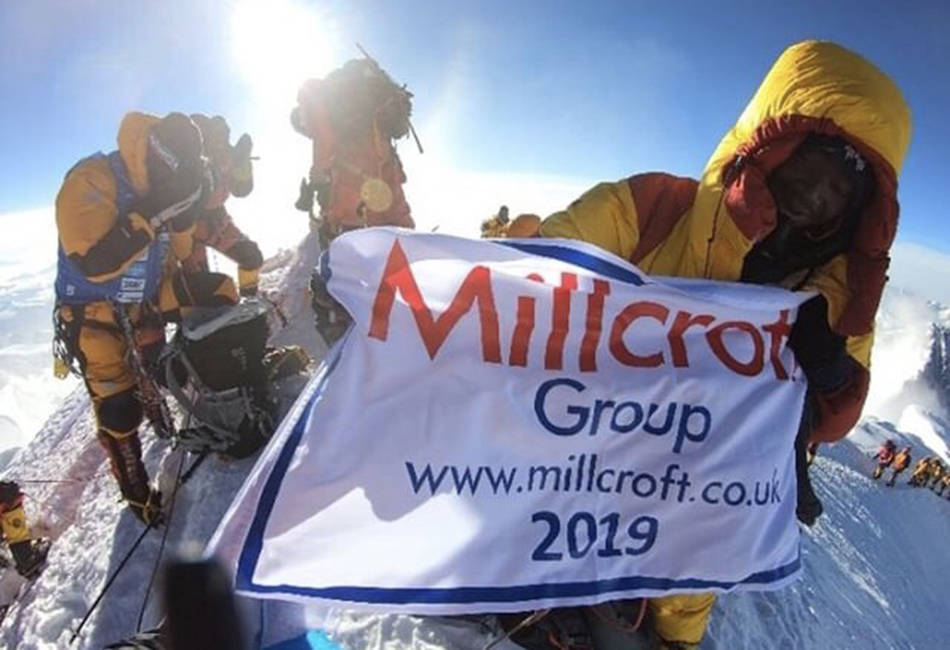