The Project
Completed in 1727, The Painted Hall is the centrepiece of the Old Royal Naval College, Greenwich. Designed by Sir Christopher Wren, it was constructed as a ceremonial dining room for what was then the new Royal Hospital for Seamen.

The 4,000m2 hall, is a masterpiece of English baroque art and often referred to as the UK’s Sistine Chapel, due to its exquisite frescos on the ceilings and walls. An £8.5 million conservation project, supported by a £3.1-million grant from the Heritage Lottery Fund (HLF), has reversed years of decay and Millcroft played a central role in providing scaffold and access solutions for both the conservation team and members of the public visiting the project.

The Solution from Millcroft
Millcroft Scaffolding was commissioned to engineer and provide the scaffold access for the Vestibule and the Lower Hall for the conservation project at the Painted Hall.

Working collaboratively with the Greenwich Foundation, we developed a design that provided both access for the conservation team and for visitors, including a disabled lift to allow the public exclusive and up-close access to the historic ceiling paintings.

A scaffold was initially erected into the vestibule, which consisted of a gantry/protection deck built with aluminium beams spanning the doorways. Profile sheeting was laid on top of the beams and fire-resistant plywood was fixed to the metal decking. This protection enabled people to access the hall while works were taking place above them. The scaffold had to be free-standing and was designed to ensure minimum contact with the historic painted surfaces.

The Millcroft team had to erect the scaffolding with the utmost care to avoid any risk of damaging the delicate frescos. We also had to work around a busy schedule of filming and events and had to keep the noise to a minimum while any filming was taking place. 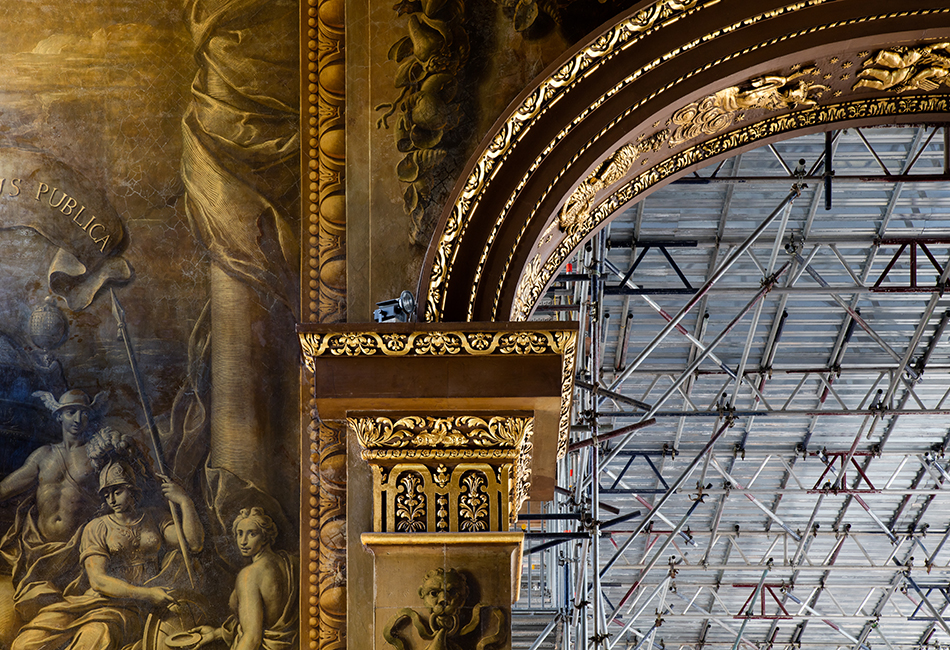 I have worked with Millcroft on several projects including the Brighton & Hove Cleaner Seas for Sussex project and have always found them to be exemplary in the discharge of their contractual obligations.
Graham Sugrue - Costain Skanska JV Project Director